A Standard Printed Text of the Talmud

Follow this link to see a standard printed text of the Talmud with commentaries. Kahana progenitors are on the page.
On the top right, Rashi, on the top left, Tosafot,(Rashi'sgrandsons),on the left side margin, a link to the additional glosses on the Talmud, one by Rabbi Akiba Eger, my mother's ancestor. Rashi, it is said, was a descendant of Rabbi Jochanan HaSandlar, a prominent figure in the Mishna. 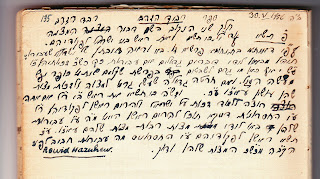 Grandfather Shmuel’s notes on Sefer Revid Hazahav are shown here, It was  referred to by his grandmother, Devorah, as a book written  by a relative. It seems to be a work by an Israel Dov Ber Gelerneter, printed in Lemberg, around middle to end of 19th century and it is a work of Jewish piety and mysticism. Devorah’s granddaughter, Sarah, married a Jonah Gelernter, a noted Hebrew educator. Perhaps there is an older family relationship.
Posted by Rabbi Dr. Norbert Weinberg at 10:03 AM No comments:

Photos on life in the shtetl 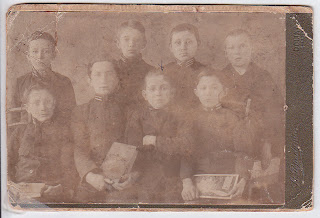 Class picture from "Gymnasia"( high school) in Dolina. If this is the entering class, at 7th grade in the American system, my father, second from right on the top, would have been  12, which would put date this picture as 1913, a year befroe the outbreak of World War I. 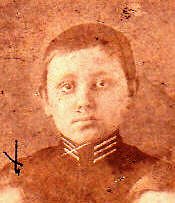 William Weinberg, age 12,in the gymnasia uniform which angered his neighboring Hasidim because it was an emblem of the assimilated Jew.
Posted by Rabbi Dr. Norbert Weinberg at 9:34 AM 1 comment:

Picture to accompany chapters on Dolyna


Posted by Rabbi Dr. Norbert Weinberg at 10:30 PM No comments:

The end of Empire and the End of the Shtetl

Excerpt The end of Empire and the End of the Shtetl
Archduke Ferdinand was assassinated, Austria entered the Balkans, the Germans declared their support of the Austrians, the Russians, the British and the Germans declared their opposition. World War I erupted on the face of Europe.
The Austrian army came to every village to draft every able bodied man. My grandfather managed to evade them. The Austrians became so desperate that cartoons show the army MD examining a skeleton and declaring,” Fit for Service”. They became short  even of the doctors and drafted first year medical students to serve as physicians. The only solution the young army doctors had for mutilated limbs was summed up in one word,” Aspirin.”
The Russian armies advanced on the Eastern front of Austria and the heaviest fighting between the two armies was in Galicia, as the Russian armies made their way through, and then were driven back. The front lines went straight through the Dolyna region
Hundreds of thousands were dislocated. Many Jews fled from the advancing armies for the capital, Vienna. The Weinberg s were among them.
.  .   .
Posted by Rabbi Dr. Norbert Weinberg at 9:25 AM No comments:

2 a Growing Up in the Shtetl

Excerpt   Growing Up in the Shtetl
My uncle, Benjamin (Benyamin,  Munio for short) was born in 1899 and then my father, Wilhelm,(William, Zeev , Villi for short)in 1901, in Dolina, the classical East European Shtetl of the turn of the previous century
In light of the custom of Jews to give names after the deceased ancestors, perhaps my uncle was named after his great- grandfather at the request of Binah. I can’t determine who my father is to have been named after; William, the anglicized form of Wilhelm, is a common Jewish counterpart to the German/Yiddish “Wulf”( wolf), in Hebrew, Zeev.
When Jacob blesses his sons, he describes the youngest, “ Benyamin Zeev Toref”, Benjamin is a ferocious wolf. Perhaps my grandfather had that verse in mind when he picked “Zeev” as my father’s Hebrew name. It was a blessing in disguise, as symbolically, the two brothers, as a team, were able to over come great danger. Little could my grandfather imagine.
There is the idealized world of the Shtetl, all of humor and the levity of a Sholom Aleichem and a Fiddler  on the Roof, and then there is the fantasists Shtetl, of an IB Singer. And then again, there is the shtetl.

Posted by Rabbi Dr. Norbert Weinberg at 9:23 AM No comments:

When the Rabbi of Dolyna sent his Gabbai( assistant) to  invite my father’s grandmother  to his daughter’s wedding,  she did not attend.  When the Rabbi asked why, she replied,” You did not invite me in person; you only sent your Gabbai!”
Yichus—Ancestry- played a great part in Jewish circles. After all, the very Bible itself is a list of “begats” from Adam down to the lists of returnees from Babylonian captivity ; from the “ Hebrew “ Scriptures it goes  on into the “ Christian” Scriptures as well. Thus it turns out that Jesus and I share the same yichus : King David and Aaron the first Cohen, High Priest.
While this may be wrapped in myth or faith, what is clear is that, in  11th century  France, there lived the shining light of Biblical and Talmudic clarity, the Sage, Rashi, who, by tradition, was a descendant of Kind David.

Posted by Rabbi Dr. Norbert Weinberg at 9:22 AM No comments:

1 B The shtetl of Dolyna and the origins of the Weinbergs.

The shtetl of Dolyna and the origins of the Weinbergs.
Excerpt.
.
The Jews of Dolyna ( also spelled Dolina) trace their origins back to the times of the Polish kings who had conquered Ukrainian territories.  My uncle, Benjamin (Munio) who travelled back and forth in the former territories of the Austro-Hungarian Empire, as a lawyer, found ancient records in the town’s archives. He reported having found documents dating to the 16th Century, when a progenitor of the Weinberg family ( with name registered as Turteltaub) came from Turkish held  regions to Dolyna. During the time of massacre of Jews  in the Ukrainian territories of Poland by the Cossacks in 1648, the borders of the Ottoman empire came just north of the town of Dolyna. These regions were spared the massacres and Sefardic Jews came as administrators or merchants into those territories. (Presumably, Turtletaub is a later “Yiddishization” of what may have originally have been a Sefardic/Spanish name, perhaps akin to “ Paloma” or “ Tortola). This first ancestor of record established the Jewish cemetery and built a house there, which was still in use at least till 1917, and the family members were always given the choicest burial plots.  He opened and operated salt mines under contract from local aristocrat. By the 17th century, the first “Weinberg” was  registered in the Grundbuch, land registry, of Dolyna in Latin, German, and Polish. (Note: This Dolyna/Dolina is not to be confused with a current Dolina, which was formerly called Janow).
. . .
Posted by Rabbi Dr. Norbert Weinberg at 9:18 AM No comments:

Here Only to Rest
Conscious Jewish historic memory begins with Abraham and Gods first words ”Lech Lecha.”-Go, an emphatic go, get yourself out of your country, from your  kindred, and from your father’s home,” Movement, whether by act of God or by human brute force, has been a hallmark of Jewish existence.
Two millennia ago, some Jews made their way into the Italian peninsula, some as merchants, some as prisoners in the course of the two great rebellions against the Roman Empire, while others made their way to the Iberian peninsula. Among them where the progenitors of my family.
Gradually, these Jews made their way from Italy  into the realms of Charlemagne and the Holy Roman Empire. This became the heartland of Ashkenazic ( Central and Eastern European) Jewry and here we have the first flowering of the great European school of Rabbinic study, as embodied in the figures of Rashi and his “ Eineklach”
( grandchildren).
It has been estimated that no more than 3000 families comprised the core of this dynamic Jewish community spred between what has become France and Germany. “ Lech Lecha”—this is what they were told, again, this time by rioting Crusaders or rapacious kings eager to seize hold of Jewish properties.
. . .
Posted by Rabbi Dr. Norbert Weinberg at 10:52 PM No comments:

1 Intro- Micro as Window on the Macro

Excerpt
Chapter 1
Micro as Window on the Macro

All Jewish thought begins with a question. Here is my question.
Why write about one family?
After all, there are 6 billion plus individuals, surely at least a billion families. Why write about Jews, who numerically are a statistical margin of error in a population census.
The Micro sheds light on the macro. One Jewish family highlights the story of the Jews and the Jews highlight the story of the human family. As the adage goes, Jews are like everyone else, only more so.
I am impelled to this primarily because of the story of my parents. My father, Rabbi William Weinberg, survived Nazi jail and Soviet exile. My mother, Irene Weinberg, survived Nazi head-hunters in the guise of an Aryan. They worked with the “ She’erith Hapletah”, the surviving remnants of the Holocaust who rebuilt their lives on the ashes of dead Europe and set off for the
wonders of America, or for the new dream of a State of Israel. They both lived to see the blessing of the Psalms,” They shall see the children of their children.”
.  . .
Posted by Rabbi Dr. Norbert Weinberg at 10:43 PM No comments: