One-Way Ticket to Survival- Paid for by Eichmann and Heydrich!

For the full text, follow these links:
Create Space by Amazon for print copy in USA
Amazon- print and ebook
Barnes and Noble/Nook
Kobo
Google Books

Paid for by Eichmann and Heydrich!

It is not clear when the Nazi leadership formulated the “Final Solution”. Recent documents show that it was incipient in Hitler’s mind while he was still a corporal in the Austrian army;it was alluded to in  Mein Kampf. It certainly took formal shape at the infamous Wannsee Conference.  What is certain is that the German leadership at this time was determined to remove all Jews from the newly enlarged German territory and one event provided the pretext to begin this massive ethnic cleansing.

In June of 1938, the Nazi pressure on Jews in Germany and Austria had grown to the point that the major nations gathered at Evian, France, to discuss a solution to the growing problem of Jewish refugees. Each nation offered its sympathies, but only the tiny Dominican Republic opened its doors . It became clear to the Nazi leaders that they could work their will on their Jews. Many had already fled Germany and it was clear that no major power was ready to stand up on behalf of the Jews. The regime now ordered the expulsion of Jews of non-German citizenship. This meant, for the most part, Jews of Polish nationality, but the  Polish government, at the same time, emboldened by the paralysis of the states gathered at Evian, stripped non-resident Jews of their Polish citizenship. Thousands of Jews were expelled to the Polish border but the border was shut before them and they were left to languish in a no-man’s land, neither here nor there.

The Second Descent into the Gates of Hell- Welcome to Spielberg

Spielberg here is not the name of a famous director—it  is the German equivalent of the Czech Špilberk.
A tourist visiting Brno, the second largest city of the Czech Republic, will go to the City Museum, housed in Castle Špilberk(Spielberg). He or she will see an imposing white building, dating back to Moravian kings in the 13th  century and later rebuilt as a baroque fortress that withstood foreign armies during the Thirty Years War. At that time that it was first put to use as a holding tank for prisoners, first Protestant heretics, then sympathizers of the French Revolution, fighters for Italian freedom from the Austro-Hungarian Empire, and Polish dissidents in the mid-1800’s.It became the subject of a book by Italian poet and prisoner, Silvio Pellico, “Le Mieie Prigioni”( My Prison) and it earned the nickname “dungeon of the nations”. By the middle of the 19th century, Kaiser Franz Josef I shut down the prison; one century later, the German conquerors would reestablish it as a prison for Czech patriots who had tried to resist the Nazis ( they would then be sent on to  concentration camps such a Terezin-Theresienstadt) .

Posted by Rabbi Dr. Norbert Weinberg at 12:17 AM No comments:

The Second Descent into the Gates of Hell- Escape to Czechoslovakia

Upon release from Brandenburg Prison, my father made straight for Vienna to ponder what clouds were appearing on the horizon and what steps to take next. By now, much of the faculty of the Berlin Hochschule were themselves in the process of finding routes of escape, so his dream of a return to Berlin was shattered. Fortunately, he had been able to finish his studies with his faculty by correspondence and earned his ordination in absentia.
Vienna in 1937 was not much less welcoming to Jews than Berlin. Austria had been under the dictatorship of Englebert Dolfuss in the 1930’s, who established his own
“AustroFascism” and,while banning both Nazi and Communist parties, allowed only his party to operate. He was assassinated by Austrian Nazis in an attempted putsch; in an ironic twist, Italy threatened to go to war against Germany to protect Austria’s independence!
My father was concerned by the possibility of an impending German invasion of Austria, and feared for his safety not only as a Jew but also as a political personage and a former prisoner. While his brother, Munio, received a visa for Switzerland, my father did not and Munio decided to stay with Willi rather than leave him to fend for himself. By December 1937, the two brothers, leaving behind all their possessions, fled by train to Brno, the capital of historic Moravia, Czechoslovakia. It was a short train ride of perhaps an hour and a half, and Brno was a major industrial and trade hub.
Posted by Rabbi Dr. Norbert Weinberg at 9:53 PM No comments:


Google Books
Courage of the Spirit-On the Cult of Naturalism
In the follow up to the first essay to appear in the Zurich newspaper, my father took up the cudgel against the neo-Romantic spirit of thought, the rebellion against the “reine Vernunft”, the Pure Reason of the 18th and early 19th century. The new Zeitgeist  emphasized emotion , experience, or will against straight logic as opposed to the ideal or the intellectual, the realm of the mind ( as expressed by the term “ Geist”, translated here as “ Spirit”).  While acknowledging the excesses of absolute rationality, he warns of the destructiveness inherent in the unrestrained adoration of the instinctual forces deep inside the human soul. The line led from Nietzsche’s  “Beyond Good and Evil”  to the horror of  Riefenstahl’s paean to the embodiment of power in “Triumph of the Will”.  Not only six million Jews but tens of millions around the world would fall as victims to the unbridled power of human savagery let loose.
The solution is in the application of “Chochmah”, the wisdom approach of classic Jewish thought which seeks a fusion of these two dichotomies in human existence. 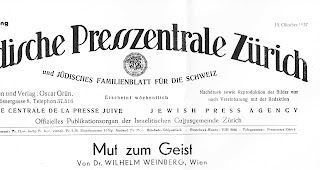 Posted by Rabbi Dr. Norbert Weinberg at 7:48 PM No comments: 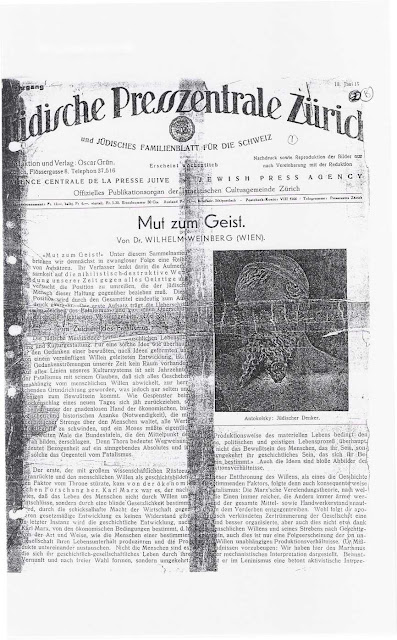 The First Descent into Hell-Continued -Letter to a Prisoner

For the full text, follow these links:
Create Space by Amazon for print copy in USA
Amazon- print and ebook
Barnes and Noble/Nook
Kobo
Google Books

The archivist at Brandenburg found, among the legal documents, a personal letter to my father from a friend of his, Oskar Gellman, dated January 17, 1936, with an extra note by Erna, whom I assume to be his wife.
His friend not only decided to appraise him of the mundane events of his acquaintances during the time her was in prison, but also to entertain him and keep his spirit up. Why the wardens would have kept just this letter, I have no clue, but the writer is so very vivid and ascerbic in his wit, that perhaps they kept it as an example of how funny these Jews could be. His writing verges on the Rabelaisian and he pokes sharply at his friends and acquaintances.
It is a window on the mood of Jews in the early years of  the Hitler reign, as the Nuremberg laws were taking effect while the ultimate horror  awaiting them was something as yet unimagineable. Clearly, the author says nothing at all about the Nazi regime, since he is aware that the letter will be read by the authorities and understands the potential impact on my father’s pending appeal of anything at all material to his incarceration. He can only make reference to it as a one –time moment of stupidity that does not match my father’s fine personality and sterling character, which he pointedly emphasizes ( as does Erna). In light of the fun he pokes at his circle of friends, one can see how highly he regards my father in contrast. There is no reference to the status of Jews, per se, but clear references to the general difficulties in finding secure employment or economic security for some of the people involved and a general sense of wishing to leave. The one reference to politics is to the Italian occupation of Ethiopia and the fear of war between the British and French against the Italians in the Mediterranean.

Posted by Rabbi Dr. Norbert Weinberg at 2:12 PM No comments: