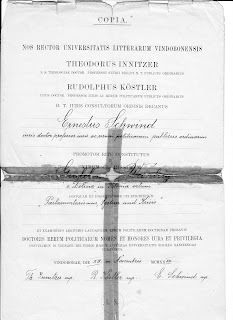 In 1928, a future Cardinal puts his signature on to the doctorate of a future Chief Rabbi and then, in a decade, the world is in flames.
Willi and his brother, Munio, finished gymnasia and went on to higher learning at the University of Vienna.
Munio studied economics and earned his doctorate in law; he was always the business minded of the two brothers and Vienna was the heart of the “ Austrian” school of economics, lead by Schumpeter (a key influence,  years later on  Cong. Ron Paul, of “ Tea Party” and libertarian reknown). This was the school of the “ creative destruction “ power of capitalism, an intellectual repartee  to Marxism, which saw the entrepreneur as the leader of civilization, and the bureaucrat as the obstacle. I don’t know to what extent Munio was indebted to that school, but years later, he would prove, both in Marxist Soviet Union and in Capitalist Canada, to be a creative entrepreneur.


My father was more of the “master of dreams”, like Joseph of old. He once told me of a relative of his who was a poet who had the misfortune to marry the daughter of a banker and inherit the bank business; he was wealthy, but miserable, because he could no longer follow his vision. He would tell me how , for the creative writer, like Balzac, the characters of his creation were more real than the people next to him; in just the same way, his father, he said, saw the ethereal heavenly guests, the Ushpizin, AbrahamIsaac and the other patriarchs who came to the Sukkah at Sukkoth as equally real as the family seated with him at the festival table. ( Like Joseph, my father would also understand the dream of the future Pharaoh—of the horrid and terrible years of destruction following the years of plenty).
Still, my father was a doer, not purely a romantic dreamer. Because of his Zionist involvement and his continuing work in the Zionist movement he gravitated to political theory. He became president of  the Zionist  Students of Austria, was a delegate to the Zionist Congress, and was proud to work at the desk that had belonged to Theodore Herzl, founder of modern Zionism and the future State of Israel.

Posted by Rabbi Dr. Norbert Weinberg at 4:52 PM No comments: