Heidelberg Talmud from the Library of Rabbi Dr William Weinberg Featured in USHMM Collection: A Tribute to the United States Armed Forces and to the Courage of the Spirit of the Jewish People.

Heidelberg Talmud from the Library of Rabbi Dr William Weinberg Featured in USHMM Collection: A Tribute to the United States Armed Forces and to the Courage of the Spirit of the Jewish People.

I am honored that the United States Holocaust Memorial Museum has just published The Last Witness: Artifacts from the Museum’s Collection and has given a prominent page to a rare set of Talmud that my mother, Irene Weinberg, z“l, and I donated to the Museum some years back.

This set, which had been in the library of my father, Rabbi Dr. William Weinberg, z"l, is unique, as it is the only one ever published with the assistance of a non-Jewish army, the Armed Forces of the United States of America. Very few complete sets still exist, and my father had one of them.

The Nazis, in their zeal to destroy the Jews, set out to destroy Judaism as well, by burning the great seminal work of Jewish thought, the Talmud. After the horror of the Holocaust, the surviving refugees in Germany sought to return to life as normal. For the religious Jew, that meant a return to the study of Talmud, but there were no copies extant anymore in Germany.

“In 1948 the U. S. Army in Germany issued a full-sized edition of the Talmud in Hebrew from Munich and Heidelberg in 19 folio volumes, printed photo-offset from the standard Vilna edition of the Talmud. This became known as the "Survivor's Talmud." The title page depicted an idyllic Land of Israel above an image of barbed wire surrounding a work camp. Only 100 sets were printed.

“The project was the result of an agreement signed in September 1946 by commander in chief, U.S. Occupying Forces in Germany, General Joseph T. McNarney, and the Joint Distribution Committee. The edition took longer than expected to produce because of the shortage of paper and the difficulty of finding a complete set of the Talmud in Germany after the Holocaust. The edition was printed at the Carl Winter Printing Plant in Heidelberg, which had previously printed Nazi propaganda. This is the sole instance of a national government publishing the Talmud.

“The edition contained a dedication in English which stated:

"This edition of the Talmud is dedicated to the United States Army. This army played a major role in the rescue of the Jewish people from total annihilation, and after the defeat of Hitler bore the major burden of sustaining the DPs of the Jewish faith. This special edition of the Talmud published in the very land where, but a short time ago, everything Jewish and of Jewish inspiration was anathema, will remain a symbol of the indestructibility of the Torah. The Jewish DPs will never forget the generous impulses and the unprecedented humanitarianism of the American forces, to whom they owe so much.
"In the name of the Rabbinical Organization
Rabbi Samuel A. Snieg
Chairman and Chief Rabbi of the U.S. Zone"

The most dramatic element of the set is the frontispiece, which is designed to look like the opening of a traditional print edition of the Talmud. However, on the bottom, it has the unusual illustration of a concentration camp with the verse from Ps. 119: “I have been almost erased from the earth, yet I did not abandon your commandments.” On the top of the page, there is an image of the sunrise over a palm-tree Mediterranean scene, representing the land of Israel. The caption reads,” From Slavery to Redemption, From the Darkness to a Great Light.”

The fact that Jews could still celebrate the publishing of this foundation document of Judaism, despite all that our people had gone through, serves as proof that no evil devised by man could crush the Jewish spirit. 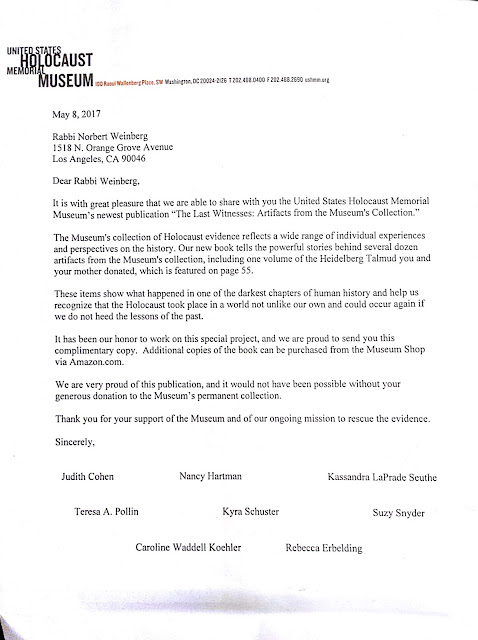 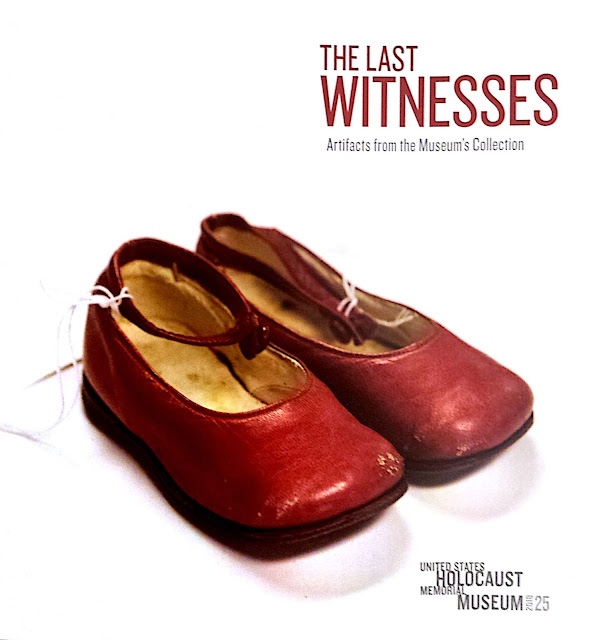 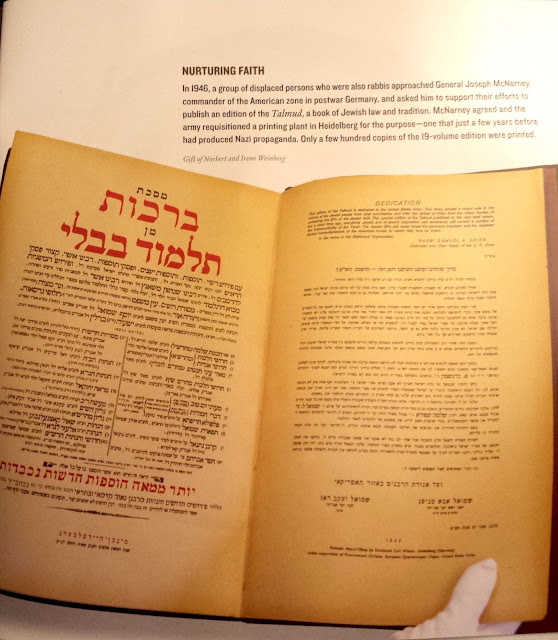 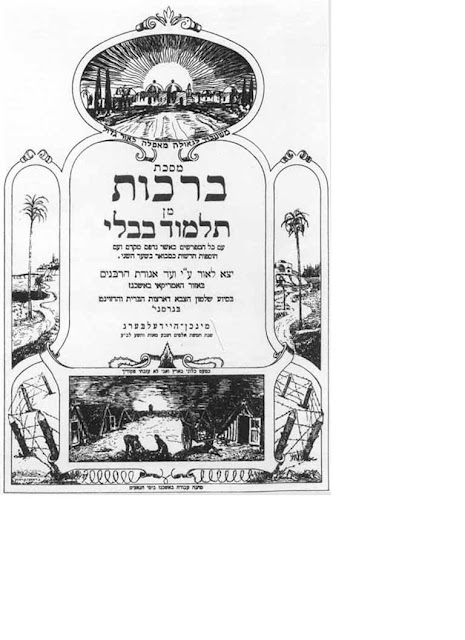 Posted by Rabbi Dr. Norbert Weinberg at 11:09 PM No comments:

We have been sickened to our stomachs by the news that the graves of our dead have been defiled in the past few weeks in St. Louis and Philadelphia.

Those who hate us take out their pitiable rage against those who can never come back to avenge them.

Thus it was, in 1950, in Germany, when the remnants of the Nazis, afraid to take action against their American occupiers, took out their grievances against the Jewish dead. My father ,as the Chief Rabbi of Hesse ( Frankfurt region) to the lead in arousing the American and German governments to take action to safeguard the cemeteries.

The following news clip from a German newspaper and a Reuters news release described the events and the response of the American High Commissioner and the new head of Germany, Konrad Adenauer,

The case had been dismissed by police as the work of juvenile pranksters. However, as the Reuters report shows, my father blasted the police for failing to reveal that several of the youngsters involved were sons of former members of the Nazi party, including some of the original Brownshirt members from the founding years, The vandalism coincided with an ongoing court case against a Nazi sympathizer.

My father caused an uproar in Germany when he announced that the Jewish community would exhume all the dead from their historic graves and rebury them in Israel, where they could be properly watched. That threat resulted in increased security at Jewish gravesites.


We are still the prime victims of the longest  racial hatred in human history.
With all the due concern for all other minority groups in America and in Europe, Jews are still the prime target. Only in the middle east ( except for Israel) is there no Jewish problem--after all, all Jews were expelled 60 to 70 years ago! 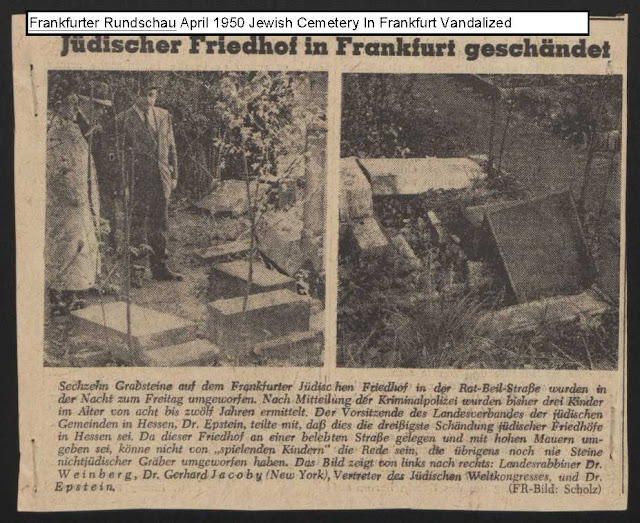 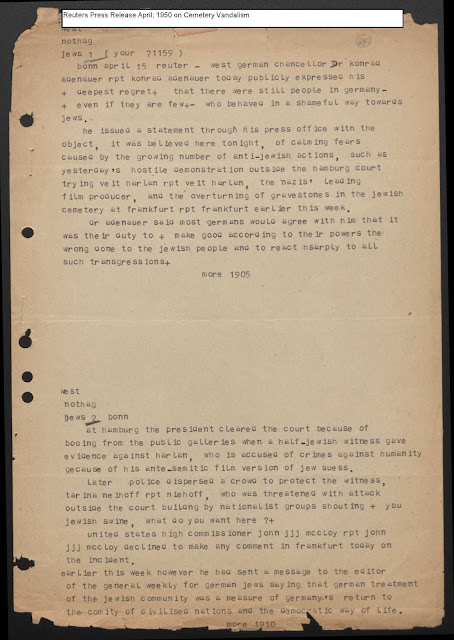 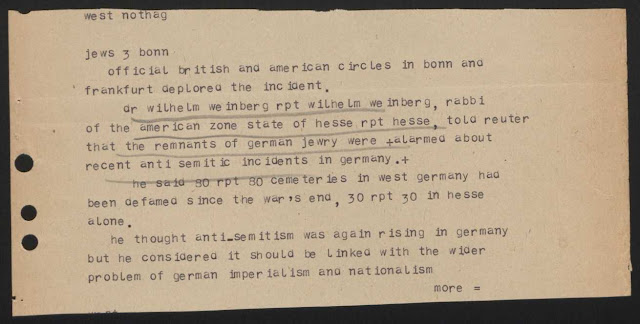 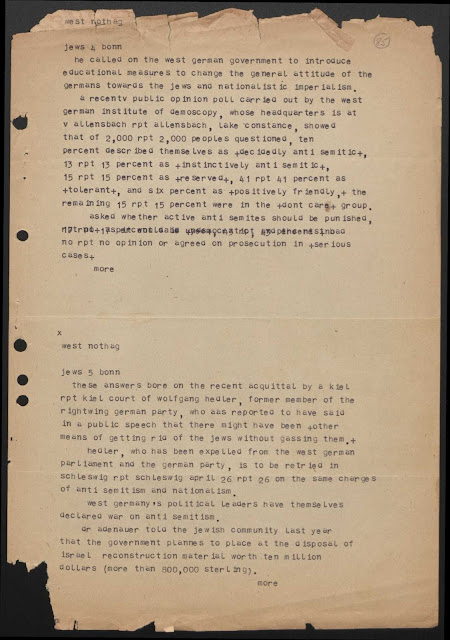 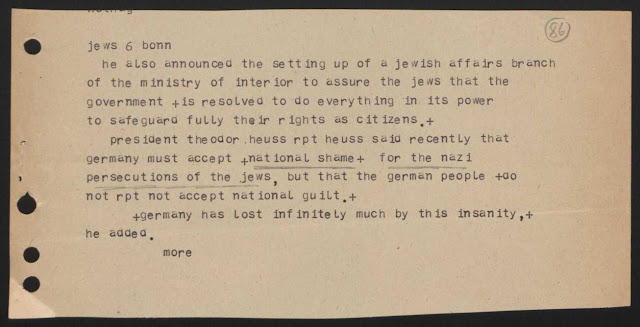 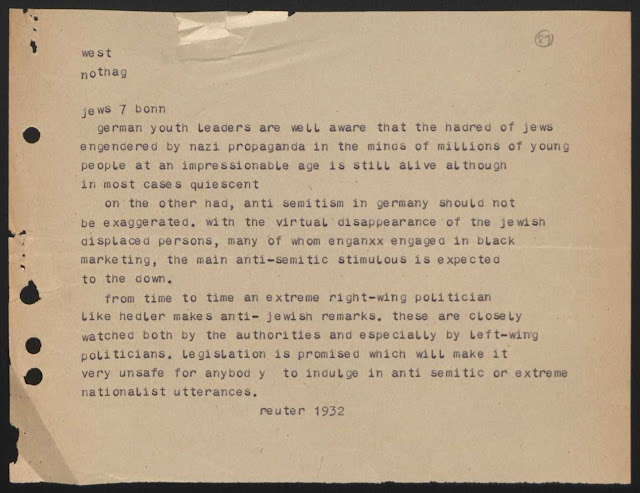 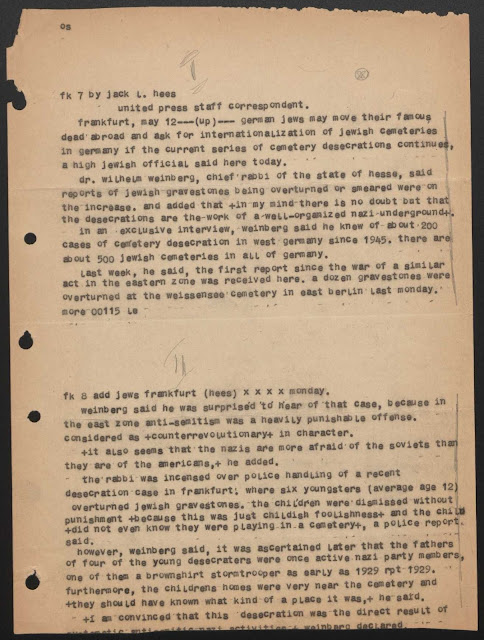 Posted by Rabbi Dr. Norbert Weinberg at 11:47 PM No comments:

My father, Rabbi Dr. Wilhelm Weinberg, then Chief Rabbi of the German Stae of Hesse,  officiated at the re-dedication of the restored Westend Synagogue on Freiherr von Stein Strasse in Frankfurt in 1950. This article was published by the office of the United States High Commissioner for Germany, John  J. McCloy, with whom my father worked hand in hand to safeguard the reborn Jewish community from die-hard Nazis after the Holocaust.

Thank you to Dr. Vladimir Melamed, Director of Archives,of the Los Angeles Museum of the Holocaust, who found this bulletin in its archival collection and shared it with me. 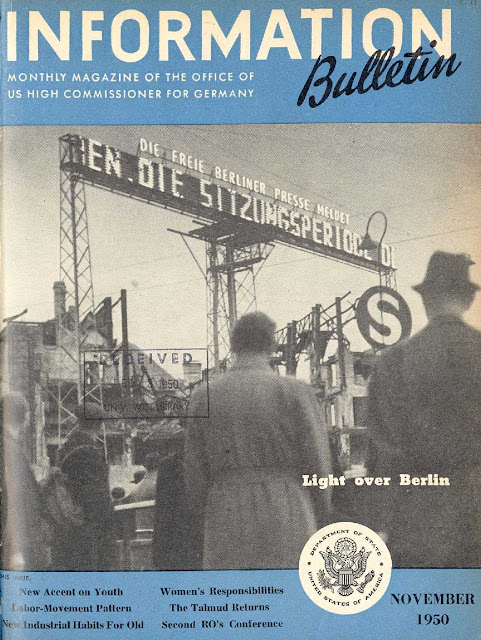 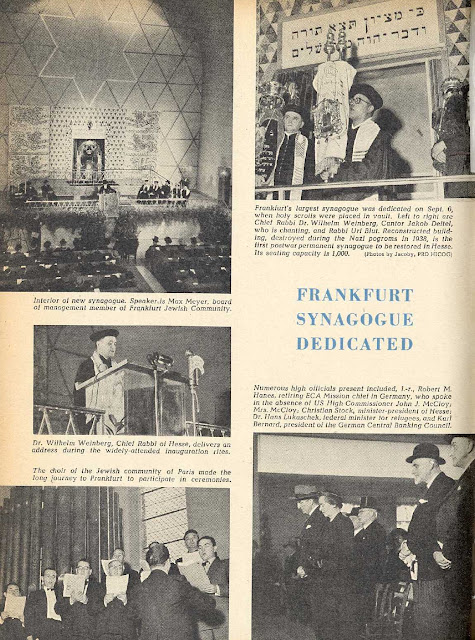 Posted by Rabbi Dr. Norbert Weinberg at 12:31 PM No comments: