An Open Letter to Congresswoman Tlaib


An open letter to Congresswoman Rashida Tlaib
Dear Congresswoman Tlaib,
Congratulations on becoming the first Congresswoman of Palestinian origin. “ Tahanina”, or as we say, “ Mazal Tov.” If things in 1948 had turned out as the UN planned, with two entities, one for Jews, one for Arabs, without the bitter fighting that ensued, perhaps we could have sat down to really celebrate, have some pita and hummus, drink coffee with “hel”( cardamom), shout “ kululoo” for you. After all, so many Israelis, Jews, as well as Arabs and Druze, shared the same language, and the main language of Israel, Hebrew, is “ kissing cousin” to your Arabic. Even our gene pool (including those blond-haired, blue eyed European colonialist white invading Jews) is more similar than either of us care to admit.
Sadly, your people have been led down a thorny path by their leaders, and your family back in the West Bank have inherited their disasters.
So, please let me address some thoughts to you.
First, it is with great pride that I recognize that you could swear your oath to uphold your duties on the copy of the Quran owned by President Jefferson. Please keep in mind, that the right, to express your faith, without any restrictions or interference by the State, did not come easily. When the first Jews came to these shores, in 1654, they had to prove their value to the Dutch Governor of New Amsterdam. Even after Jefferson’s famous Statute on Religious Liberty of Virginia became the basis for the First Amendment’s freedom of religion, Jews still had to struggle for many generations, till they could hold elected office in some states, reach high rank in the military, or travel freely in the pursuit of a livelihood (General Grant’s famous foul-up in Tennessee).This was true for Quakers, Baptists, Mormons, and Catholics as well( think of JFK). Your rights, regardless of your religion, are built upon the backs of others.
Which is why I found your quip about “ Dual Loyalty” in regard to the debate on banning BDS to be especially disgraceful. It is more befitting of a David Duke. It certainly sounds duplicitous as you, yourself, at your victory party, wrapped yourself in a Palestinian flag. Now, it is very common, in the course of American history, that descendants of various immigrant groups showed signs of pride and affection for the country of their origin- Irish for Ireland, Italians for Italy, and I would not begrudge a Palestinians affinity for fellow Palestinian Arabs ( Jews were Palestinians until 1948; my brother-in-laws birth certificate says so).
However, It is not common to support a movement whose express goal is to eliminate another state, as the BDS organizers, and you yourself, have stated openly.
I note that you quickly back-tracked on your statement, to claim it was in reference to lawmakers who were not loyal to the Constitution. It is ironic that the progressives, such as in your Democratic Socialists of America ,are among the most vocal to advocate truncating rights of free speech or religion--for others.
(Just an aside, as an irony of history, your movement’s founder, Eugene V Debs, was a white racist, who wanted to keep African Americans down, and keep out immigrants, such as Chinese and Jews. The movement was later taken over by truly great figures, such as Michael Harrington and Irving Howe, and then almost died out, literally of old age).
And speaking of duplicitous, when you began your campaign, you claimed to be in favor of a two -state solution, one for Israelis, and one for Palestinians. Fine, that’s what Israelis accepted in 1948. But, once your campaign picked up speed, you switched, to a one state solution, with the right of return for all Palestinians, so that there would, in effect, no longer be a State of Israel. Even JStreet dropped you like a hot potato.
Now, please allow me to correct some clear racial profiling you have created in your speeches.
This is from an interview you gave in the run up to your successful election on August 14, 2018:
“…Seeing the unequal treatment in Israel, in the different colored license plates for Palestinians; and even in the ocean. When I was 19 and with my family and some of them had head scarves on, we all jumped in the water and the Israelis jumped out as if my cousins were diseased. “
http://inthesetimes.com/article/21383/rashida-tlaib-democratic-socialism-palestine-israel-michigan
There is this transcript of an interview you gave just after your election, on Nov. 18, to UK ‘s Channel 4 News:
Look I am a person that grew up in Detroit where every single corner of the
district is a reminder of the civil rights movement. I can tell you when I was 12 years old I sat there with my mother when she was shifted into a line with all the other brown people and then all the other folks you know mostly citizens of Israel and another section, and the way that she was treated less than that, inequality.
https://www.youtube.com/watch?time_continue=4&v=SiVKfcLa5V8

You were born in 1976, so that this 1st experience of yours at age 19 occurred in 1995, just 2 years after Paris accords, after Israel opened the doors of Gaza and West Bank to Palestinian Authority with great expectations. And what happened?  Israelis were being murdered as they boarded buses. My daughter was a student at the Hebrew University that year, and it was her good fortune not to have taken the bus when it was bombed. Instead, she often took the buses of east Jerusalem( Arab) to get around, as it was less likely that the terrorist would bomb their own!
I had lived in Kfar Sava at that time, and till that time, there had been a free flow of people from the “ West Bank” to Israel proper, until the PLO’s henchmen started planting bombs and we had to have parents take turns watching our children’s schools for any suspicious objects. One family was burned to death in their car as they drove near the neighboring town of Kalkiliyah.
So, to jog your memory, I am posting a list at the end of this letter, just of bombings of Israeli civilians boarding buses in that same period, after Israel had begun the process of giving the Palestinians the foundation work for a future state, that period in which you were surprised by Israelis jumping out of the water.*

And those license plates-well, first, they were given your people by Jordan. The Israelis kept separate registration because they kept the area under Jordanian civil law, not Israeli law. Now, your people asked for, and got, separation from Israel, under the Paris accords, eagerly agreed to by the Rais ( top man) himself, Yasser Arafat. It’s not Israel’s fault that the Palestinians asked for separation!
You gave the second interview when you were 12, which would have been in 1988.  The line you are referring to, the only line I can imagine, is the line getting in to Ben Gurion airport. Yes, there are two lines- one for citizens, one for non-citizens, just as in the US. Was there extra scrutiny of Arabs, especially those who were “ Jordanians” ( after all, Jordanian law still held in the land that had been occupied by Jordan from 1948-1967).?  That was following a previous decade of bombing and terror attacks on airplanes and airports by the PLO and its allies.
As for identifying with “ browns”, keep in mind, that at that around that time, in Detroit, the African-American community felt itself exploited by the local Arabs
. ''They exploit us,'' said Robert Walls, a senior official in the city's Neighborhood Services Department. . . . When the subject of Arab merchants arose, the conversation turned angry.
''Let me tell you about overcharging,'' Gaines  [ one of the city officials at the meeting) said. ''They operate on pure greed.'']
''It is greed,'' said Smith-Gray. ''And it's the way they act toward us. You can go into some stores where kids have to walk with their hands at their sides'' - presumably an antishoplifting measure. https://www.nytimes.com/1990/07/29/magazine/the-tragedy-of-detroit.html
Your fellow Arabs were the whites at that time. In fact, Arabs were labelled as white on the US census as a result of a lawsuit—in 1915!
As for “ brown”- most Israelis are “brown”, just as Ahed Tamimi and many other Palestinians are “fair-skinned” or have blue eyes.( Centuries of invasions by Greeks, Romans, Arabs,  Vikings, Franks, and so on have left their mark).
Now, as to Israelis jumping out of the water—perhaps your confusing this with the experience of Jews in Iran and Yemen, when they lived under Shiite rule, and were considered ritually impure and untouchables. You see, in Israel, they can have a judge of Arab origin, George Karra, preside over the trial of the President of Israel; that’s not what apartheid regimes do. I was in Israel this past summer, during Ramadan, and repeatedly saw, in the evening, at sunset, at the end of the daily Ramadan fast, Arabs  sitting at the same restaurants with Jews, and shopping freely in the same stores. Nobody was “ jumping out”.
I took these pictures this summer.
Do these pictures look like the South under Jim Crow or Apartheid in South Africa? 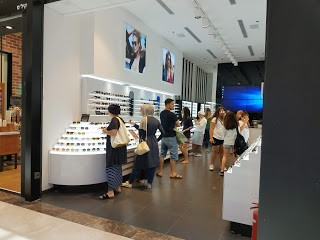 Which is woman is Jewish, which Muslim in this Jerusalem eyeglass shop? In case you have trouble determining which is which, the Jewish woman is on the left, the Muslim woman on the right. It’s all in how the scarf is wrapped. 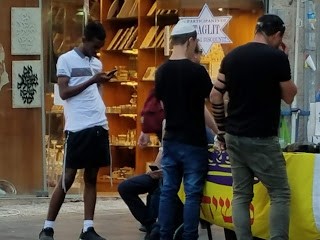 Black-skinned, white-skinned, who cares, on a Jerusalem street- but both have the tzizit hanging out!

In sum, Hon. Congresswoman Tlaib, before you speak of Jewish dual loyalties, please keep your story straight. Stop using racial dog whistles and stop pitting “ browns” against “Jews”.
Maybe, one day, we will be able to get together over a cup of coffee with “hel”.
Inshallah, Im Yirtzeh Hashem, God Willing,.
Salaam, Shalom,
Rabbi Norbert Weinberg