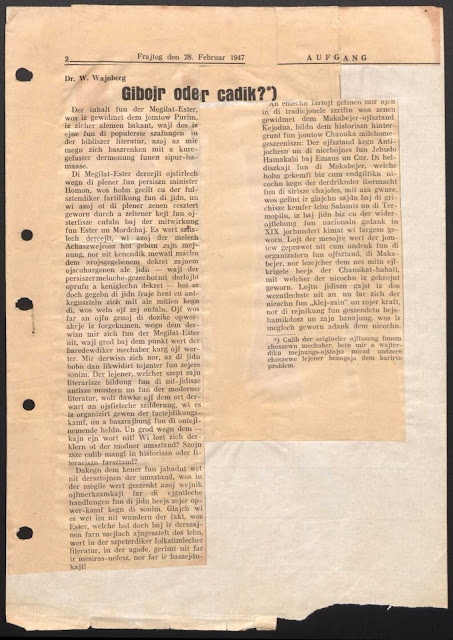 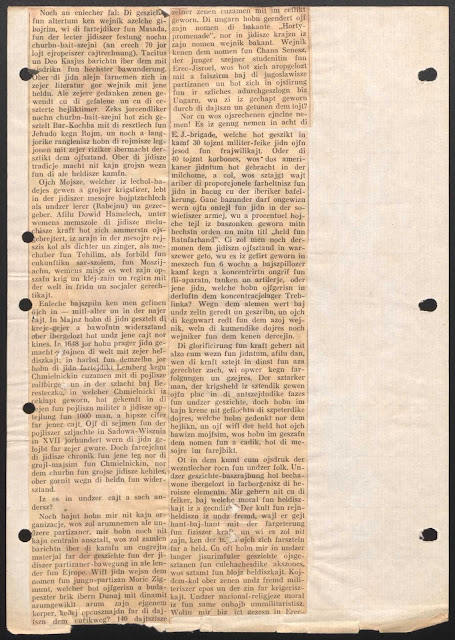 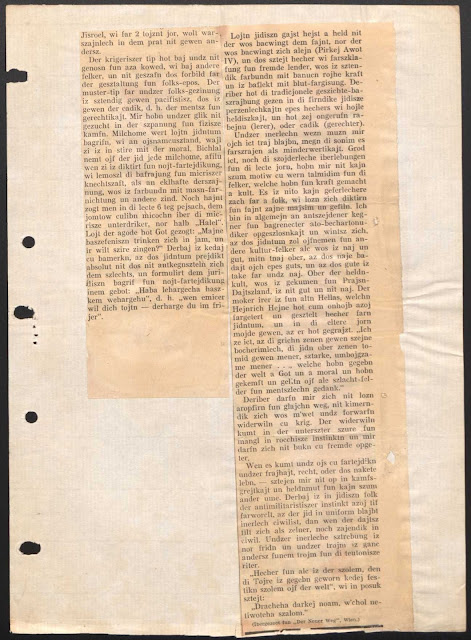 A rough translation of Yiddish text,in Polish transliteration, of German essay
on Purim for the Survivors in the DP Camps by Rabbi Wilhelm Weinberg. Found on United States Holocaust Memorial Museum archive on line. Hebrew typeset was hard to come by, so Yiddish texts were transcribed in Latin letters, in this case, by Polish conventions ( hence "Cadik" for "Tzadik").

The content of the Megilat Esther which is the theme of Purim is surely well known by all, since it is one of the most popular creations in the Biblical literature. Nevertheless, I allow myself to present you a summary of the events.

The Megilat Esther describes in detail about the plan of Persian Minister Haman, who had intended the complete destruction of the Jewish people, and how this plot was undone by the unusual planning of Mordecai and Esther. It is then told how the King Ahasuerus gave his edict, that he could not undo his previous royal decree to destroy the Jews, since that was not allowed by the laws of the Persians, but he would give the Jews a free hand to defend themselves by all means necessary against whoever would attack them. Why this is the only solution offered, we do not have an explanation, but the author is suddenly short on words. We only know that the Jews liquidated thousands of their enemies.
The modern reader, who draws his literary understanding from non-Jewish and modern literature, would just at this point expect a description of how the Jews could plan and carry out their struggle for survival and a description of the participating heroes. But just here, there is not a word! How does one explain this form a modern perspective? This is missing from a modern historical or literary perspective.

However, one who understands Judaism would not be surprised that the Megilah dedicates so little attention to the details of the Jews struggle against their opponents.  Just so, he is not surprised that Esther, who has offered her life to appear before the king, is praised, in later Jewish folk-lore, the Agadah, not for her mesiras-nefesh (self-sacrifice) but for her modesty.
In a similar vein, we have our traditional texts about the Maccabean uprising. As is well known, the historical background of the Chanukah festival is the military event: the uprising against Antiochus and the victory of Judah Maccabee at Emmaus and Tzur.  The heroism of the Maccabees, who struggled to absolute victory against the overwhelming forces of the Syrian army, with such courage, comparable to the heroism of the Greeks at Salamis and Thermopylae, was for the Jews almost completely forgotten till the revival of Jewish nationalism in the 19th century. By tradition, the festival is not based on the recalling of the organization of the victory of the Maccabees but on the miracle of the bottle of oil wherewith the victory is crowned. In Judaism, the essence is not on the military victory of raw power, but the purification of the debased Temple and its renewal, which is the result of the victory.

In the same manner: The ancient account of the few similar heroes, such as the defenders of Masada, the last Jewish fortress after the fall of the Temple (70 CE). Tacitus and Dio Cassius report on this in great detail and amazement. Just the Jews give scant attention in their literature to these heroes. Six decades later, Bar Cochba, with the remnants of the Judeans, arose against Rome, and only after a prolonged struggle, could the Romans, with their overwhelming power, put down the rebellion. But the Jewish tradition makes no to-do about all these heroic struggles.

So to Moses, who is by all accounts, considered a great military leader, lives on in the Jewish imagination as our teacher (Rabenu) and law-giver. Even King David, under whose government, the Jewish state expanded its borders for the first time by military success, is only remembered in the Jewish tradition as poet and singer, as author of the Psalms, as prototype for the Prince of Peace, of the Messiah, in which the military and the weapons will be set aside and the world will be ruled in social justice.

Even so we see this in more recent times. In Mainz (Mayence), the Jews held off the Crusaders, but we know only of Kinos” (lamentations). In 1648, the Jews of Prague stunned the world with their heroism; in just that same year, the Jews of Lemberg ( Lwow) fought together with the Poles against Chmielnitzki, and in the slaughter at Beresteczko, in which Chmielnitzki folded, there was a Jewish division of 1000 soldiers, a huge number for its time. In the same way, at the Polish slaughter at Sadowa-Wisznia In the 17th century, the Jews were praised as great heroes. But the Jewish literature of the time tells only of the cruelty of Chmielnitzki and of the destruction of Jewish communities, but nothing of the heroes of the resistance.

Is there anything new in our day?

Even till today, we have no organization that is collecti8ng information on our Partisans, not yet any central institute that gathers the reporting of the struggle and to save the information about the Jewish partisan movement in all lands of Europe. How many Jews know the name of the young partisan Moritz Zigmunt, who destroyed a bridge in Budapest on the Danube by strapping dynamite around his own body, in order to block the retreat route for the Germans? 140 German soldiers went down with him. The Hungarians have their famous “Horthy Promenade” but in Jewish circles, his name is unknown.

Few know the name of Hannah Szenes the young attractive student from Eretz Israel, who parachuted down to the Yugoslav partisans   and made her way to Hungary where she was captured by the Germans and executed.

Furthermore, we can give the example of the Eretz Yisrael Brigade, which sent into battle 30,000 Jewish volunteer combatants. Or the 40,000 casualties that the American Jews suffered in the war, a number far beyond their proportion in the population.  So too it is exceptional that Jews participated in high numbers in the Soviet armed forces and who  earned in unusually high numbers the medal of “Hero of the Soviet Union. “We also note the Jewish uprising in the Warsaw ghetto, an exemplary stand of 6 weeks duration against a concentrated force of aerial bombardment, tank and artillery shelling. Or the Jews who rose up in the Treblinka concentration camp? Yet we rarely speak or write of all these, so little that future generations will know even less.

The glorification of power does not belong to the realm of Judaism, even when used in the service of such a just cause as oppression and edicts against us. The man of power, the war hero stands in our tradition in an unhonored place, no crown placed by later generations, who thought only of the saintly, only if the miracles were attributed to a Tsaddik, and then it was remembered for eternity.
Our historic account intentionally left out the heroic element. We do not belong to those people for whom the hero is the ultimate. The cult of the great hero is foreign to us, as it goes hand in hand with the sanctification of physical power. Our national religious ethic is unmiltaristic. The war hero gets no honors. The ideal for us is the pacifistic, the Tsaddik, the man of righteousness. We did not see our fortune in physical conflict. Even where force was essential, as in the freeing of the slaves form Egypt, we did not see it as a virtue. Even today, on the last six days of Pesach, we only say the half-Hillel. The Agadah says in God’s name: My creation is drowning and you want to sing praises?”
This is not to say that Judaism denies self-defense. “ Haba lehargecha”- who come to kill, rise and kill him first.”

We consider a hero not to be the one who defeats the enemy, but the one who defeats himself. (Pirke Avot IV) This far greater than conquering foreign lands and shedding blood. For this reason, our historic teachings have elevated our personalities beyond the heroic cult, to the level of “Rabenu” teacher or “Tzadik, righteous. We cannot allow ourselves, especially after these years, to define our values by those of the other nations. Nothing is as dangerous to a nation as to have its values dictated by its enemies. I deny that we are bound to reject everything new because of “ Atoh bochartanu, but we can absorb that which is good from other nations, but not the Hero-cult. That which has come to us from Prussian Germany is neither  good nor new. It is as ancient as Hellas.

Thus, Heinrich Heine, when he was young, adored all that related to the Greeks. He then later declared.” I see now that the Greeks were merely handsome striplings. The Jews, however, have always been men, strenuous and full of power,..who have given to the world one God and a moral law, and have fought and suffered in all the battle-fields of thought."

We cannot allow ourselves to adopt this way of thinking. We cannot allow ourselves to be overrun by murderous impulses. When it comes to our rights, our freedom, our life, we can take up arms as cannot other people.  But the anti-militarism is so deeply ingrained in the Jew, that even when he is in uniform, he is civilized, While the German, in uniform, was not civilized. Our inner drive is towards peace, and our dream is a very different dream than that of the Teutonic Knights.

The greatest of all is Peace, and the Torah was given in order to promote peace in the world, as it says, “Derachecha darchei noam vchol neitivoteha shalom.” Her paths are pleasant and all her ways, Peace.”