More on the Gemuetlich Life in Vienna

Scenes from the better years, when the Weinbergs could spend a pleasant summer on the beach somewhere on the Yugoslav coastline.C. end of 1920s, early 1930's. The family had business interests in Trieste,a former part of th Austrian Empire that had been occupied by Italy, and the Benjamin spent much time there to oversee the business. 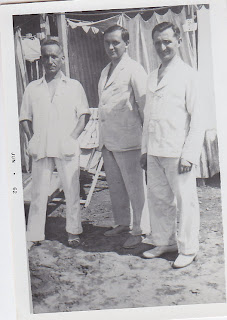 My father, center, with his brother, Munio, right, and uncle , Jonah Gelernter, noted Hebraist and teacher of Hebrew at the Vienna Hebrew Gymnasium.Before World War I, he was active in Galicia, in the area of Stryj, with the Ivria Society for the revival of Hebrew as a living language and culture.